The glorious sound of a lawn mower confirmed what the busy birds have been trying to tell me for weeks. Spring has sprung. It was still light at 18:15 yesterday. My compulsion to comment on how light it is in the evenings will continue until June when talk will invariable turn to how the nights are drawing in. You can’t say I haven’t warned you.

It’s been a busy few weeks with lots of graphic design projects. I have been keeping up with my #40daysofdrawing though. It’s been liberating not overthinking; on average each square has taken about 15mins, so not long.

I follow Philippa Perry online. She tweeted that she was planning on wasting the next 25mins on Twitter answering questions and did we have anything we wanted to ask her. So I did. 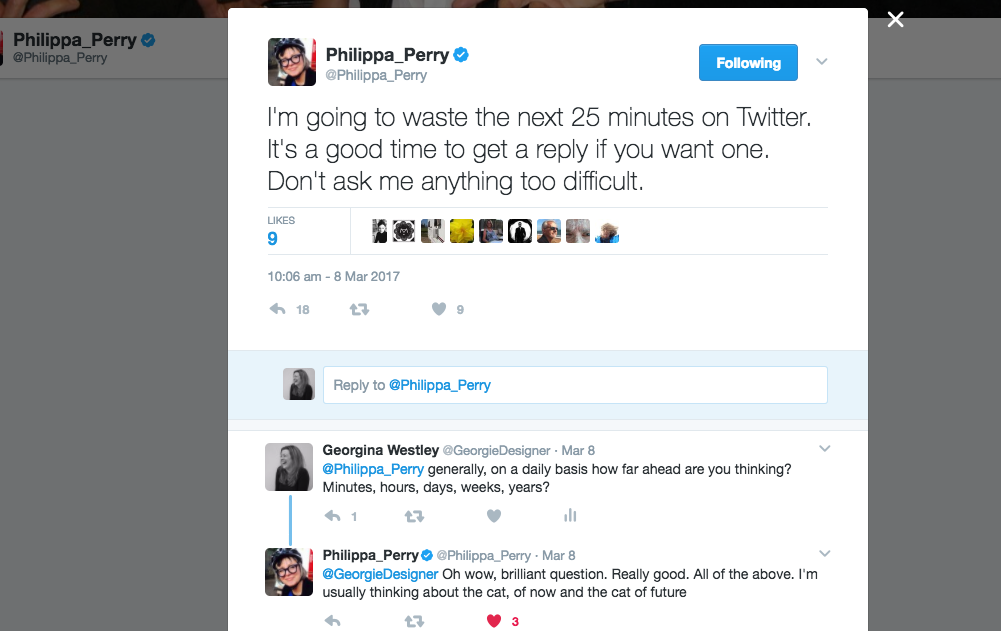 I did a little shimmy on receipt of the reply. A psychotherapist said I, moi, asked a good question. I’m pretty sure that makes me an MSc. or PhD. by association.

Anyway, the reason for sharing that with you was to show off. But the reason for asking the question in the first place was because I realised that recently I have been thinking in minutes and hours. Yes, I know all the stuff about being in the present moment. I love all that, I really do. It keeps me sane. And in terms of stopping and smelling the roses, I generally stop and sniff a plenty.

But I have also got into the cycle of constantly doing, churning out, ticking off lists, wondering where I am supposed to be in the next hour. Who and what have I forgotten, is there food in the fridge, when did I last change the beds and is that 4pm print deadline today or tomorrow. Please say it’s tomorrow.

Maybe I simply need a bit more structure. Not too much mind, otherwise I get all fidgety. But I might reevaluate how I plan my time. This flying by the seat of my pants schtick is quite exhausting.

Anyway, on to less moany things. I was recently interviewed by the lovely people who run the Just A Card campaign. I believe the interview will be featured on their blog soon, but I just wanted to say thank you to those people who give up their time to focus their energies on promoting and fostering creative communities. It really is appreciated.

I’ve been continuing to enjoy all the painting programmes. We are so used to seeing the finished article in whatever form, that watching others create, observing their thought processes and witnessing their decisions is such a treat. It gives us a brilliant insight into how things get made. As is often, the end result isn’t the product of a well mapped out plan, but the accumulation of a series of decisions which could go either way at each junction. I’m not sure that sentence even makes sense and I’m too tired to rewrite it, but I know what I mean. I’m warming to Pascal too. He’s like a painting Patrick. That’s a lazy comparison but I’m feeling lazy. When Pascal signed such thoughtful words to Ruaridh it made my eyes fill up, and then my daughter asked why Richard Coles always dresses up like a Vicar and the moment was gone.

In other more mundane news, I cut my finger earlier in the week. Don’t worry it wasn’t my money maker. It was my left index finger. But it has made a few things tricky. Ever tried to spray deodorant with your middle finger? Takes quite a bit of concentration.

Right, I think we can safely say I’ve run out of things to say now, so I’ll bid you farewell.